Curious about pickleball? So were we! In today’s article, we explain how this game came to be, and just why it’s so popular in certain parts of the world. 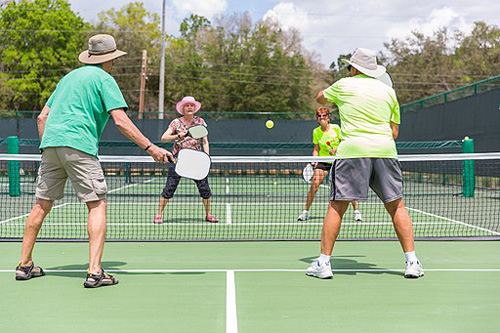 Pickleball is a paddle-based ball sport that brings together familiar elements of other paddle and racket-based games, including badminton, tennis, and table tennis or ping pong. Balls are typically constructed out of perforated polymer, with paddles constructed from solid materials such as wood, or other composite materials. In terms of size, the paddles themselves sit somewhere between the dimensions of a tennis or badminton racquet, and a table tennis paddle.

The history of pickleball dates to around 1965, when a former state representative of Washington was spending time with 2 friends after a round of golf. Without the shuttlecock needed for a game of badminton, the 3 friends improvised a similar sport by lowering the badminton net, picking up a ball and fashioning paddles of plywood from a shed.

An Overview of Pickleball

Pickleball, or pickle ball, is a sport that’s played on a 20-foot by 44-foot badminton-sized court, regardless of whether it is a singles or doubles game being played out. The central net is hung at 36 inches each end, and 34 inches in the center, lower than that of a badminton court. Much like a tennis court, the pickleball court is striped, yet unlike tennis, it has no alley on either side.

Also like with tennis, the ball is served in a diagonal direction, with points only being awardable to the side of the court that served the ball (just like squash). On each side of the court, competitors must allow the ball a single bounce before they are permitted to volley the ball, with a 7-foot ‘no volley’ area to each side of the central net, which prevents ‘spiking,’ a tactic common in tennis. The ‘no volley’ zone is affectionately called ‘The Kitchen’.

Recommended Next: We talk all things pickleball balls in our latest guide. 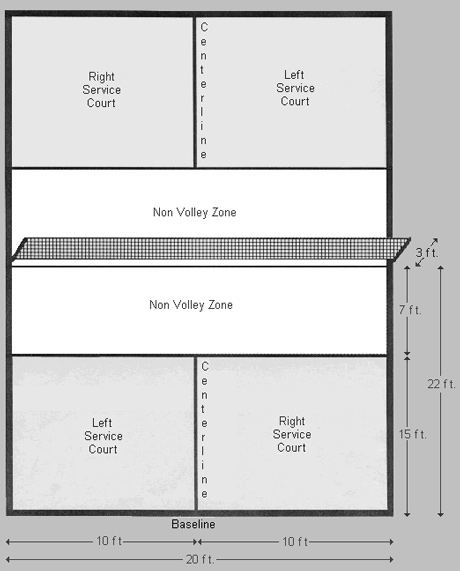 Serves are always performed underhand, never overhand, and the pickleball paddle must be kept below the waist, and the ball itself hit into the air without bouncing on the floor before it has cleared the net. In terms of stance, the person serving must maintain both feet behind the backline throughout the action.

When each game begins, the first team to serve the ball is permitted just a single fault per competitor; only one attempt at serving is permitted per person unless impacting the net and falling onto the opposing side, at which point that side may take over-serving and re-attempt the serve themselves. Otherwise, service switches sides once both members of a serving team have faulted.

Volleying has the same meaning in pickleball as in tennis, meaning any attempt to hit the ball into the air without letting it bounce on the court first. In pickleball, this move is only permitted when a player’s feet are behind the 7-foot ‘no volley’ zone line, and after the ball has bounced at least once after the first service, as we will explain in the next section.

This rule allows rallies to occur more easily and prevents quick points where players gamble at the net, looking to smash a quick volley. This is the kind of rule that makes pickleball so accessible and fun to play. It has been designed with enjoyment at the core, and the double-bounce rule and ‘no volley’ areas are central to this.

Not sure where to play pickleball? Don’t miss our latest article that explains all!

Pickleball has a number of rules around when a fault would be considered to have been committed by a player; these are as follows:

A team may be awarded a point only when it is their turn to serve the ball, and the serving player must continue to serve until their team commits a fault; this applies to both solo or doubles play. When a fault is made, the service changes over to the opposing team, who may then score points through serving. This is called a ‘Side Out.’ A game is won at 11 points, though a team must win by a margin of 2 points or greater.

The popularity of this sport varies from country to country, but within the US for example, there are estimated to be over 15,000 total indoor and outdoor courts dedicated to the sport. At least one pickleball location is located within each of the American states. Additionally, the sport is taught within physical education classes in middle and high schools across the country.

What’s more, a study conducted in 2016 to determine the level of participation within the sport found that there were more than 2.5 million pickleball players active within the US. This surveying was conducted by the Sports and Fitness Industry Association (SFIA).

While all traditional racket sports are unique and fun in their own way, pickleball takes the parts that make them so enjoyable and combines them into an accessible game for all. The rules are designed with enjoyment at the core, with the double bounce rule ensuring that rallies occur on each service point. The ‘no volley’ area also ensures that players have time to hit a shot and are not constantly defending aggressive overhead volleys from the net like in tennis. It’s a sport for all ages and skills that is seriously fun to play.

There are loads more articles like this coming soon at SkillSpeedPower.com. We’ll even have a guide to the top pickleball paddles going live in the near future.

Make sure to bookmark us or follow us on social media to stay notified of all the latest news.