New to tennis and need a little help with the rules? Don’t worry, we explain the scoring system and rules, besides explaining the interesting history of how the game came to be. 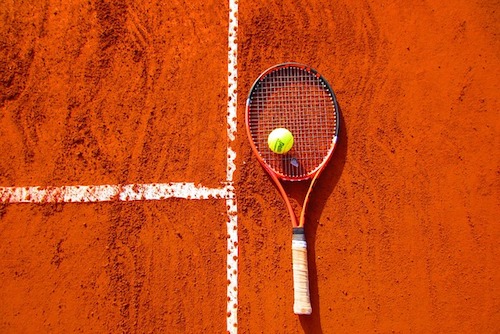 Tennis is a game that involves strategy, fitness and a lot of preparation. If you are new to the world of tennis, you are in for an entertaining ride.

Tennis is a fun sport that almost anyone can play. Whether you are a player or a spectator, it is an exciting thing to be a part of.

In this brief guide, we will explain everything you need to know about tennis, from how it all began to even why a tennis ball has fuzz. By the end of it all, you will at least be a pro at understanding tennis.

Tennis has a long and interesting history that dates back hundreds of years. In the 12th century, French monks developed a game called Jeu de Paume or game of the hand. The monks played over a rope or against a wall.  They had so much fun that they even made it part of their ceremonies. When a monk was about to serve, he would have to yell “Tenez!” which loosely translated means ‘take heed.’ This is probably where we got the name. 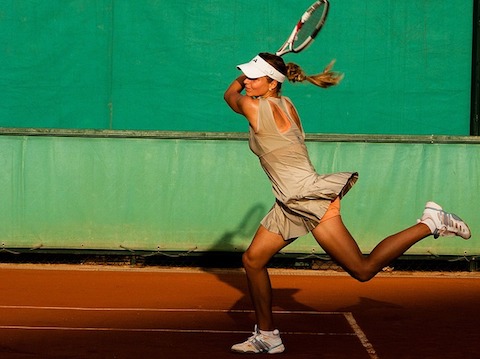 The monks could not keep this fascinating sport a secret and it soon became popular all over Europe. Somewhere along the line, someone decided that leather gloves made the game more fun. When your hands didn’t chafe against the handle of the racquet, you could play longer and have even more fun. Eventually, people just put leather around the handle of the racquet which made things even easier.

As with all fun things, some people just have to try and ruin the fun. Both the Pope and Louis IV tried to have the game outlawed but were unsuccessful. The rise of Puritanism was what nearly killed the game completely. Under the strict rules of this era, tennis was viewed as a form of gambling and was outlawed.

Tennis once again enjoyed immense popularity during the Victorian era in England since lawn tennis was a fun way to pass the time and a lot easier than other games. In 1850, Charles Goodyear’s rubber vulcanization process resulted in balls that bounced higher. This made the game more interesting and people began to play it more competitively.

In 1872, Mary Outerbridge introduced the game to Americans, and tennis was once again one of the most popular games in the world. Americans loved the game and the rest of the world followed suit.

How to play tennis

Tennis is relatively easy to understand once you know the rules. There are two players, each one has a racquet. They will stand on either side of the net, on what is called the tennis court. Tennis can be played by two people on opposing sides, this is called singles, or by four people (2 on each side), this is called doubles. 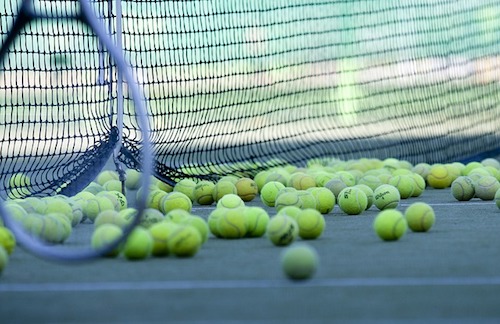 Basically, when a player scores four points and has a two-point advantage over the other player, the game is won.

But, the scoring terminology in tennis is unique in sports and seems a little complicated at first. However, it’s actually very straight-forward, you just need to remember a few special words.

If the game is tied at 40-40 we call this ‘deuce’. A player must win two consecutive points from this moment to win the game. Should you win the first of these points, we call this ‘advantage’. So the commentator might say, “It’s advantage Roger Federer”.

Another tennis phrase is “break point” or being “broken”. To be “broken” means that your opponent has won a game where you were the server. The “break point” is the final point of this game. You have a slight advantage as the server in tennis, so this is where that phrase comes from. 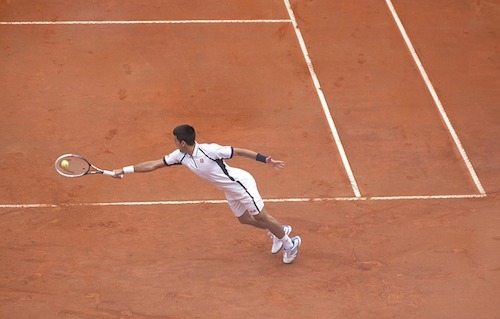 Now that you know how the game starts and how the scoring works, we can move on to the rules. These rules are very basic. Each player stands on the opposite side of the net on a rectangular court. They will then use the racquet to hit the ball over the net.

Each player can let the ball bounce once on their side of the net before hitting it back within the boundaries of the court. Your shot must land within the borderlines on your opposing player’s side of the court. Should you hit the net, or hit it wide or long then you will lose point. An exception is made when you actually hit your opponent. This scores you a point, but it is thought to be quite an unsporting thing to do.

Tennis is deceptively simple, but it requires a lot of strategy. If you have ever played a game of tennis, you know that it is not as easy as it sounds. Before you can win, you need to know more about your equipment and the court you will be playing on.

Most beginners choose to go with a racquet that has a wider face because this increases the chances of hitting the ball. And since almost all racquets are made from synthetic materials nowadays, they are light and easy to swing. 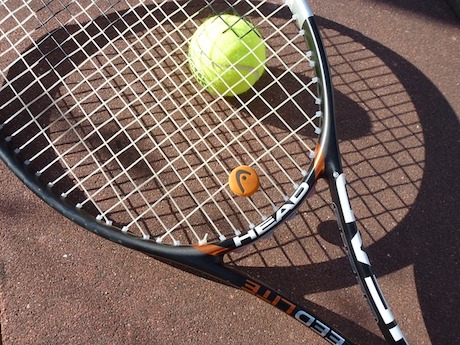 As you get better at the game, you might want to start looking at narrower racquets since they provide more speed and agility. You will notice that all professional players use racquets with a narrower head. Once you are more proficient at the game you will immediately notice the difference in the power and accuracy.

The way you grip your racquet is also very important. Your entire game can be thrown off if you do not hold the racquet properly. If you have an instructor, they will begin by explaining the difference between the Eastern and the Continental grip. The Eastern grip is used mostly by beginners and is easy to master. Once you become more skilled, you will learn how to use the Continental grip. These grips will do wonders for your gameplay.

The ball is one of the most important factors of the game. Tennis balls are round and usually come in fluorescent colors. They must be fluorescent yellow for major sporting games. Tennis balls are covered with a fibrous felt which enhances their aerodynamic properties; basically, it makes it bounce better and fly more smoothly. Each ball has a white curvilinear oval covering which also helps with the aerodynamics. 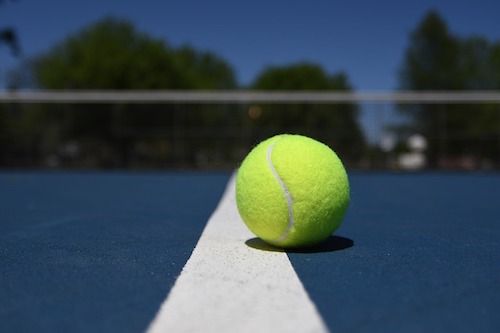 Early tennis balls were made from wool wrapped with the stomach of a sheep or goat and were tied with rope. Later, King Louis XI ordered that they were to be made from good leather and stuffed with wool. Prior to this, balls were filled with chalk, sand or sawdust. Other versions of these balls also popped up and were made from fur and wool variations.

Later, Walter Clopton Wingfield and Harry Gem began manufacturing balls that are closer to the type we use today for lawn tennis and croquet. After Charles Goodyear invented vulcanized rubber, the balls were filled with air. Later, John Moyer Heathcote suggested covering the rubber ball with flannel. Finally, in 1882 Wingfield advertised his balls as covered in stout cloth made in Melton Mowbray. From then on, the tennis ball was well on its way to becoming what we know today.

A proper tennis court has to be 78 feet long and 27 feet for singles and 36 feet wide for doubles. The service line has to be 21 feet from the net and an additional clear spacer around the court is need so that players can get to overrun balls for a total of 60 feet wide and 120 feet long.

The net has to be stretched across the full width of the court and be parallel with the baselines. This will divide the court into two equal ends. The net must be 3 feet 6 inches high at the posts and 3 feet high in the center.

These were once the most common courts but are still known as the fastest courts. They are now very rare since they are so expensive to maintain. But they are easier on the body and are better for older players. The grass is grown over hard-packed soil which can add different variables. Grass courts are better for serve-and-volley tennis players.

Wimbledon is the most famous Tennis championship that takes place on grass.

These courts are made from a uniform rigid material that is covered with an acrylic surface layer. This offers a greater consistency of bounce. These types of courts can differ in speed, but they are not as fast as grass courts.

Indoor courts are usually better to play on since they prevent the weather from affecting the game. Indoor tennis courts usually have the same surface as hard courts but are just inside a building.

While watching a match or talking to players, you may have heard some interesting phrases. Tennis has its own language, which we touched on earlier with the scoring. Here are some more tennis phrases that you’re likely to hear. Some of them are also applicable to other racket sports like badminton. Here’s our tennis glossary:

Tennis is a fascinating game. It has a long history that dates back to a bunch of bored monks who wanted to pass the time in a fun way. It was nearly banned by a few massively important people, but it was so much fun that the public would not let it die. It’s now one of the most popular sports in the world, with maestros like Federer and Djokovic doing things that were once thought impossible.

If you liked this guide then you might enjoy our beginner’s guide to soccer too.

Make sure to follow us on Facebook to get notified of all the latest sports posts here at SkillSpeedPower.com